skip to main | skip to sidebar

The PGA West Quest - Getting into the routine...

Perhaps a little introduction before I get into my first Coach’s Blog… My name is Philip Rowe, I was a member of the Stanford golf team from 1999-2002 and I have just returned to The Farm after playing on various professional golf tour circuits in Europe. The complete story about my appointment to the position of Assistant Coach with the Men’s Golf Program can be read in this interview.

I have now been with the team 4 weeks and PGA West was my first event as a “Coach”. I have thoroughly enjoyed everything. So far as the results from the PGA West event goes, hopefully you have had the opportunity to check out the Stories of the Season: Report from The Prestige at PGA West. Since our return on Tuesday evening, one of the team players has even posted an update to the Players Blog… Here’s what Sophomore Andrew Yun had to say about his individual victory (by 6 shots) in the desert!

Andrew points out that “this new school year has brought a bit of the new along with the old” and that is definitely what the coaches are sensing as well. Despite adjustments to new routines, the freshmen have already made an impact within the team and are keeping some of the more experienced players sharp on their toes. Our top team lineup might still be under construction but tremendous depth means that every squad member is making preparations for their contribution in a successful NCAA Championship run (a 9th!).

Moving on from the first event in Olympia Fields to last week at PGA West, I think the ultimate encouraging sign is that with 9 holes to play in the final round, we were in contention and poised for both team and an individual victory. That’s the Cardinal back into the routine! 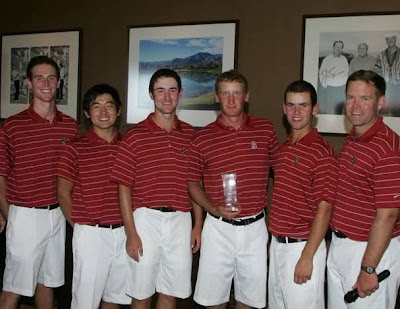 In one week (Friday October 22nd), 5 Cardinal players will be flying to Orlando, Florida for the Isleworth Collegiate Invitational. Check www.stanfordmensgolf.org for updates on qualifying...

Posted by prowegolf at 2:01 PM No comments: