skip to main | skip to sidebar

The Team heading to Cordevalle

It only seems a few moments ago that the team arrived on campus to prepare for Olympia Fields and set off along the Road to Riviera (venue of the 2012 NCAA Championship Finals). With experience gained from competing at The Prestige and Isleworth, we now head to Cordevalle for the final event of the Fall which completes the first third of our season. 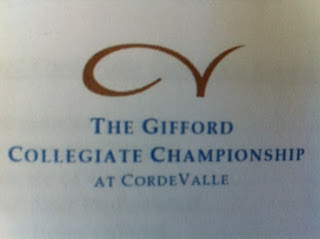 The result at Isleworth (Team came 7th with three players finishing inside the top-10) was yet more evidence of the critical importance that strength in depth has when competing in medal team events. With a somewhat young team it is therefore great news that we will have as many as eight players gaining competitive experience this coming week since The Gifford Collegiate Championship at Cordevalle is a six-man team (counting the five best scores each day) and a further two players will also join the field as individuals.
Here are the results from the qualifying outings this week to decide the Cordevalle line up:
First of all, whilst five of the team were in Isleworth, the rest of the team (minus Wilson Bowen who is currently sidelined whilst he gets treatment for a neck injury) played a 36-hole preliminary qualifying event at the Stanford Golf Course.
The results were as follows:
1 Shane Lebow 73 67 = 140 (E)
2 Marcel Puyat 69 72 = 141 (+1)
3 Andre Dedecker 77 69 = 146 (+6)
4 Patrick Grimes 85 72 = 157 (+17)
Based on those results, Shane Lebow and Marcel Puyat joined David Chung and Steven Kearney in an 18 hole shoot-out at the Stanford Golf Course to decide the final 3 three spots on the team:
Played on 10/28/11 the results were:
1 David Chung 63 (-7)*
2 Shane Lebow 71 (+1)*
3 Marcel Puyat 73 (+3)*
4 Steven Kearney 74 (+4)
*Qualified to join Patrick Rodgers, Andrew Yun and Cameron Wilson to represent the Cardinal in the six-man team event.
Andre Dedecker and Patrick Grimes were simultaneously engaged in a qualifying match to join Steven Kearney as an individual competitor in the event...
1 Andre Dedecker 74 (+4)*
2 Patrick Grimes 75 (+5)
*Qualified for the final individual spot.
In summary, here is the final team and individual line-up for Cordevalle:
1) Patrick Rodgers
2) Andrew Yun
3) Cameron Wilson
4) David Chung
5) Shane Lebow
6) Marcel Puyat
Individual 1: Steven Kearney
Individual 2: Andre DeDecker
The Gifford Collegiate Championship tournament field of teams (Arizona, Coastal Carolina, Long Beach State, Northwestern, Stanford, UCLA, Oregon, USC, Virginia, Washington State, Washington) is mighty strong so we hope to see many Stanford Golf supporters out and about to cheer us back to the very top of the podium. Situated only 45 minutes south of campus at San Martin, CA, the beautiful golf course that recently hosted the PGA Cup and the Frys.com PGA Tour event.
Here is a map from Campus to Cordevalle:

View Larger Map
Go Cardinal!!!
Posted by prowegolf at 9:22 AM No comments: